How to Take a Screenshot on an Android Phone

Hardware, How to, Softwares / By IT Net Fix 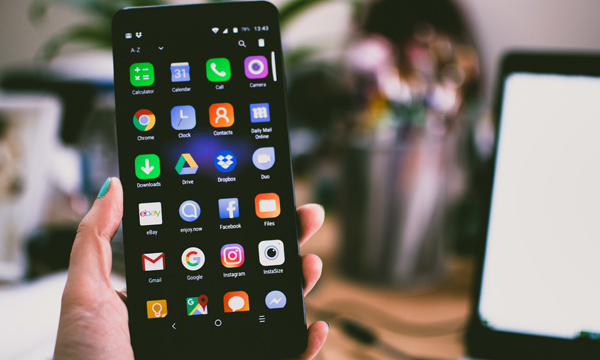 Screenshots are incredibly handy. At times, you don’t even need words, one screenshot is enough.

The best way to take a screenshot on most Android devices is to simultaneously push and hold down the power button and the volume-down button. The screen will flash, and a message will pop up to show you the latest screenshot in your gallery. Some devices allow you to edit it , but if you don’t just dive into your phone gallery where you can work with it.

If this doesn’t work, try pushing down the actual home button and volume down at the same time.

These simple methods should be all you need for most Android devices. There might, however, be several exceptions. Android device manufacturers also have extra and special ways to take Android screenshots. You may take a screenshot of the Galaxy Note series using the S Pen, for example. Other manufacturers have chosen to totally eliminate the default form and use their own instead.

How to Take a Screenshot on Samsung Phones

As mentioned earlier, there are several manufacturers and devices that have chosen to go rogue and add their own methods of taking screenshots on Android. In certain instances, there are solutions that can be found in addition to the three primary approaches discussed above. In such instances, the default Android options will be totally substituted. You’ll find several of the examples below.

Smart Select helps you to grab only particular bits of what’s on your phone, take oval-shaped snapshots, or even create short GIFs from movies and animations!

Access Smart Select by moving the Edge Panel, and then selecting the Smart Select option. Choose the shape and the region you want to capture. You may need to activate this function in the settings first by heading to Settings > Display > Edge Screen > Edge Panels.

Smart Capture helps you to capture the entire web page, rather than just what’s on your screen. Use either of the above techniques to take a standard screenshot, then pick Scroll Capture and begin tapping to scroll down the page. This essentially stitches several pictures together.

There’s another way to take a screenshot on some Samsung phones. Go to Settings, then select Advanced Features. Scroll down to see the option of Palm Swipe To Capture and turn it on. To take a screenshot, simply put your hand vertically on either the right or the left side of the smartphone screen, and then swipe on the display. The screen should flash and you can see a message that a screenshot has been taken. 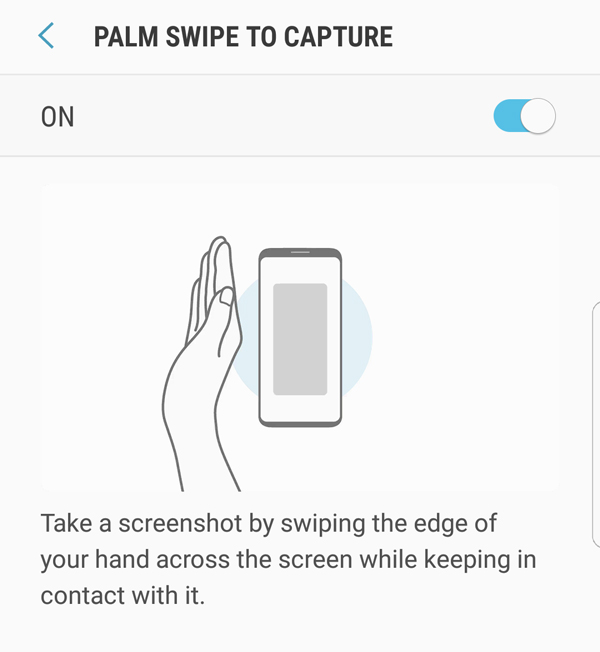 You can use the S Pen to take a screenshot, if your device comes with one. Only take out the S Pen and launch the Air Command (if it’s not done automatically), then select Write Screen. Usually, the image will be automatically opened for editing after the screenshot is taken. Just remember to save your edited screenshot afterwards.

If you don’t have your Samsung phone set up to recognize the “Hey Bixby” command, just press and hold the dedicated Bixby button on the phone’s side, and then say, “Take a screenshot” to finish the procedure.

How to Take a Screenshot on Sony Phones

You can find a screenshot option on Sony devices in the power menu. Just push the power button, wait for the menu to appear, and choose Screenshot to take a screenshot of the current screen. This can be a helpful tool, particularly when it’s difficult to press combos on physical buttons.

How to Take a Screenshot on Motorola Phones

Motorola systems are very simple and clean. The company sticks to a near-stock user interface, so you don’t have a lot of choices to take a screenshot. You should use the good ol’ power + volume down hold trick.

How to Take a Screenshot on Huawei Phones

Use the Notification Bar Shortcut

Huawei makes it more intuitive to take a screenshot by offering you a shortcut to the notification area. It looks like a paper-cutting scissor. To get your snapshot, select it. 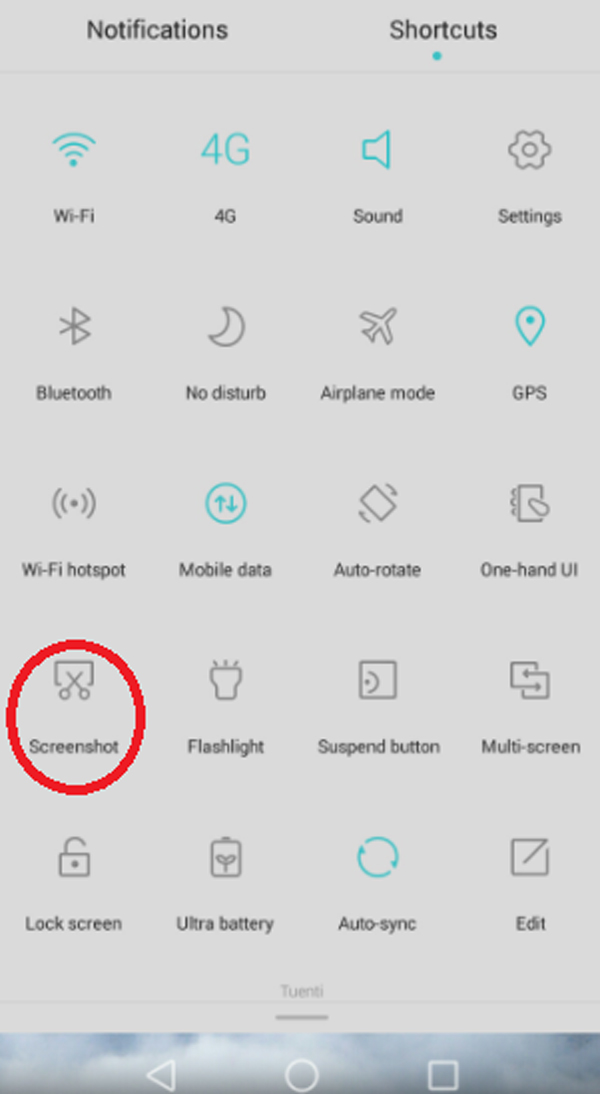 Air Gestures allow you to take steps by making the camera see your hand gestures. These need to be activated by heading to Settings > Accessibility features > Shortcuts & gestures > Air gestures, then ensuring that Grabshot is activated.

Once enabled, go ahead and put your hand 8-16 inches away from the camera. Wait for the hand icon to emerge, then close your hand into a fist to take a screenshot.

How to Take a Screenshot on Xiaomi Phones

Xiaomi smartphones will give you all the normal choices when it comes to taking screenshots, but still adding in a few methods of their own.

Like a few other Android skins, MIUI offers easy access to notification shade screenshots. Just pull it down from the top of the screen and find the screenshot option.

Use the Quick Ball

Quick Ball is close to what other manufacturers used to provide a shortcut section. Using this tool, you can quickly activate a screenshot. You need to enable Quick Ball first, however. Here’s how to do it. 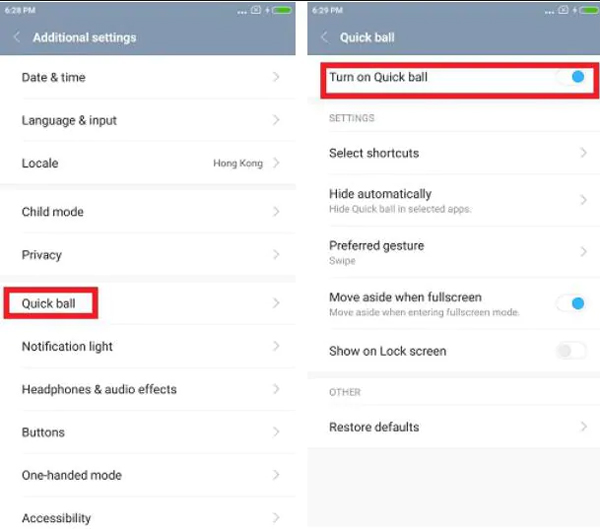 From any screen, just swipe down the screen with three fingers on a Xiaomi smartphone and take a shot of the screen. You can also go to settings and assign a variety of different shortcuts, if you choose. These involve long pressing the home button, or making other movements.

How to Take a Screenshot on LG Phones

Although you can use the default methods to take screenshots on LG devices, there are a few other choices as well.

Air Motion works with LG G8 ThinQ, LG Velvet, LG V60 ThinQ, and other devices. It requires the use of the built-in ToF (time-of-flight) camera to identify the air gestures. Just wave your hand over the interface until you see the symbol indicating that the gesture has been registered. Then pinch the air by placing the fingertips together, and then pull them apart again.

Another way to take screenshots on older devices like the LG G8 is to bring down the notification bar and tap the Capture+ button. This will allow you to capture regular screenshots, as well as extended screenshots. You’ll be able to annotate the screenshots as well. 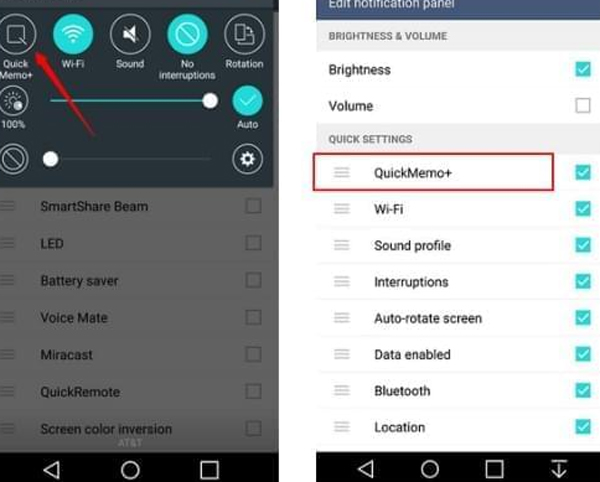 You can also take a Quick Memo screenshot that can immediately grab and help you make doodles on your screenshots. Just turn Quick Memo from the notification shade. Once enabled, the editing page will appear. You can write notes and doodles on the current screen now. Tap the disk icon to save your work.

How to Take a Screenshot on HTC Phones

HTC will allow you to take screenshots using all normal methods. However, if your device supports Edge Sense, you’ll be able to use it as well. Just head into the settings to change what short or long squeezing the device does by going to Settings > Edge Sense > Set short squeeze or Set squeeze & hold action.

As most other devices, HTC’s smartphones often add a screenshot button to the notification area. Go ahead and use it to capture what you see on your phone.

How to Take a Screenshot on OnePlus Phones

You can hold down the power + volume buttons to take a screenshot, but the company has another trick up its sleeve!

OnePlus phones will take a screenshot on Android with a three-finger swipe.

The feature needs to be enabled by going to Settings > Buttons & Gestures > Quick Gesture > Three-finger screenshot and turn the feature on.