Zapier vs IFTTT Which is Best for Automation

How to, Softwares / By IT Net Fix 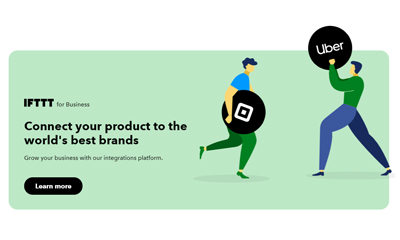 Task automation tools are the core of productivity. And more often than not, people are torn between Zapier vs IFTTT, which are two of the most common tools right now. Choosing between them will bring you in a tough position.

Zapier is a workflow automation platform that lets you connect different apps to automate routine tasks. Inside Zapier, you can build new Zaps automated workflows between applications—by specifying prompts, automated tasks, and actions.

Zaps allows you to streamline or remove redundant activities without having to code or depend on developers to create new integrations. If you don’t want to build your own Zap from scratch, there are also a lot of Zap templates out of the box.

When you build a new Zap using existing integrations, you start by simply selecting the app. Then you’ll be taken to the Zap editor where you can select an event trigger to launch the Zap. In this case, the Zap can be activated automatically, that is when a new row or column is created in Google Sheets.

You can select another app and the corresponding action event under the “Do this…” option. For example, you can choose to send a Slack or Gmail. After the trigger event, multiple actions may occur.

IFTTT which means if this, then that is an automation platform that uses an action from one app to automatically trigger an action in another app. With IFTTT, you can generate an Applet that connects services based on triggers, conditions, and actions.

These applets allow you to do something that you wouldn’t have been able to do on your own. IFTTT also comes with a set of existing Applets if you don’t want or need to design new Applets yourself.

When you create your own applet, you start by selecting a service and triggering it. For example, if a new row is added to Google Sheets, you can choose to fire the workflow. In the same way, you can select actions from other services that will also occur automatically.

Millions of applets are already available on IFTTT, but as you can see, it’s easy to set up your own custom applets using existing services.

The Key Differences Between Zapier and IFTTT

Let’s break down some of the most important distinctions between Zapier and IFTTT so that you can better appreciate what suits your business needs:

Zapier has more than 1,500 integrations with leading applications like Slack, Trello, Gmail, and more. It’s also pretty easy to set up your own using APIs or webhooks if appropriate. A rich collection of documentation is available to create specialized workflows for Zapier. 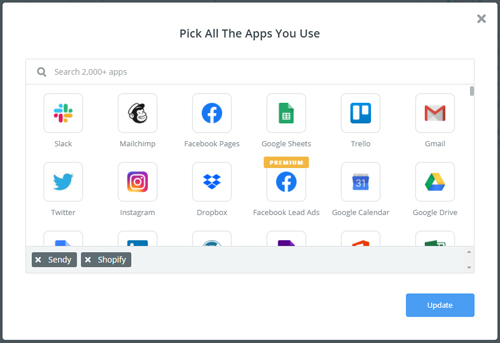 IFTTT has much fewer integrations and yet hundreds of services including the most popular out-of-box applications. You can create a custom service and combine it with APIs if you choose to use another app. Many users have found it more difficult to locate the documentation they need for IFTT.

Zapier has functions that are more tailored to businesses. You may build more complicated Zaps that integrate with a number of different systems. That said, it’s not as easy to learn how to use Zapier and make the most of its advanced capabilities. Zapier is also ideal for larger teams that might have some semi-technical staff who want to simplify complex workloads.

IFTT is more tailored to particular consumers. Applets are typically limited to one or two basic measures for more mundane activities. It also implies that IFTT is easy to use and has a much shorter learning curve. IFTT is also suitable for non-technical consumers who want to streamline their day-to-day activities. 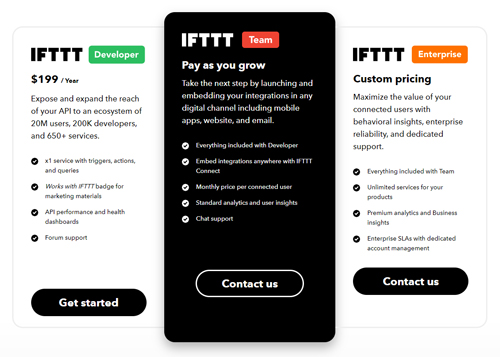 What Reviews Are Saying

Across the board, IFTTT is doing impressively well. There are indeed small complaints, such as failed initial downloads, and no way to differentiate between an Android phone and a tablet until both are attached to the same account. Largely, though, IFTTT is a success in article reviews; the simple UI is going down well, along with the general ease of use once you’ve got it up and running.

Like its rival, Zapier already has stellar reviews; the promise of the platform, along with the overwhelming amount of available integrations, is also emphasized as a significant enough selling point. Once again, though, we need to be a little careful, since the price strategy is put into context when paired with the general assertion that Zapier is a business automation tool.

At one point or another, the vast majority of reviews say that Zapier is fantastic for business automation. Not just this, but those who do not always compare it to IFTT, assume that one cannot be recommended over the other. We’re seeing the enterprise-casual divide between these applications in action; when viewed as a business application, Zapier can wipe the floor, but as a pure automation app, IFTTT continues to slip its way to level-heading.

After all the assessments, what app will you use to automate your life?

The truth of the matter is, we’d recommend both.

Zapier is an absolute monolith of automation tools if you need to perform a complicated job at every stage, Zapier would be able to locate the exact piece of data that you are after every single time and sort it all in your chosen location. In this sense, there is actually nothing that can challenge it.

However, IFTTT has the advantages of usability and mobility; smartphone apps encourage you to fire fast recipes on the go or even follow useful new ones from a genuinely fantastic range of shared recipes. Do you need to make a note or save a receipt instantly and just have your phone? Do you want to log your day or workout time, or do you want to make an important reminder? IF’s got your back.

There’s a reason we’ve been trampling business vs. casual metaphor into the ground; if you want to get rid of as much of your life’s tiresome legwork as you can use IFTTT in your personal life and Zapier in your business.